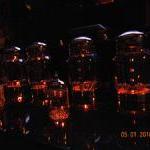 MP3s, how and why they affect our systems, and system choices